Night Café by Van Gogh was painted in September 1888 while he was living in Arles. Earlier in the year he had moved to a room at the Café de la Gare, where the room depicted in this painting was. Van Gogh stayed there for a few months over the summer while he furnished what would become known as “The Yellow House”, where he would famously live with Gauguin for a brief time.

In the center of the canvas Van Gogh shows a billiards table not being used. We see 3 walls of the room with a door opposite the viewer. The walls are lined with tables and chairs, some occupied by figures, hunched over the tables. Most of the six figures are men, but there is a woman at one table. Standing close to the pool table, leaning on another table is a standing figure wearing white, the owner of the café. On the far wall by the door there is a bar with bottles on top and a vase of flowers in the center. Van Gogh’s exaggerated perspective creates disorienting angles and results with the majority of the painting being filled with the deep yellow floor. The walls are a rich red, contrasting with the yellow floors and yellow lights hanging from the ceiling. 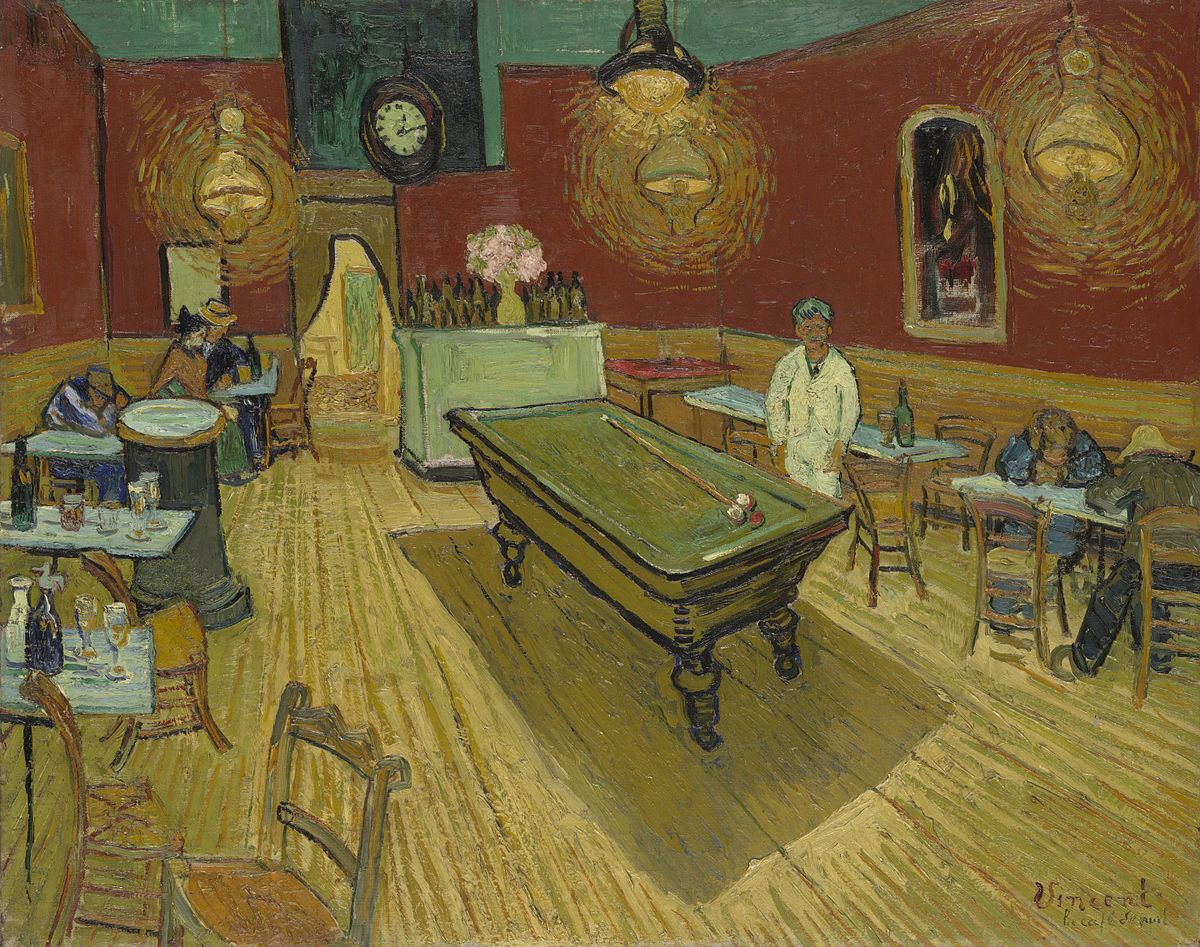 Van Gogh was interested in painting night scenes, as can be seen in his paintings of Starry Night and Café Terrace at Night. Today, we are lucky to know so much about Van Gogh’s paintings by the hundreds of letters that Vincent wrote. In one such letter, he said “the night is much more alive and richly colored than the day.” Prior to painting Night Café, Vincent wrote that he was planning to paint the room and the “Night prowlers” as he called those that spent the nights there. Van Gogh was interested in these people that stayed there because they “had no money to pay for a lodging, or are too drunk to be taken in.” He imagined that they saw themselves as travelers without a native land, and he himself imagined himself the same way. While he didn’t see himself like them, he imagined having similar feelings.

In a letter to his brother, Van Gogh called the painting “the ugliest I’ve done” and gave it to Joseph Ginoux the owner of the café as payment for his room. His calling the painting ugly is also a description of the room and the feeling you get from it. In his description of the painting, he uses words like “blood-red” to describe the color on the walls, “battle” to describe the contrast of reds and greens, and refers to those in the room as “ruffians.” The harsh colors and disorienting perspective reflect the overall sadness, bitterness, and loneliness, of those in the room. All of this adds up to an idea of if you are in this café at that late hour, something isn’t going right in your life.

Van Gogh spent three nights painting this room sleeping during the day. He saw this as showing “terrible human passions” and that one can “ruin themselves” in a place like this café. Vincent didn’t praise this painting in his letters, but spoke of it in the same sentences as The Potato Eaters and The Sower, two paintings that he was very proud of.