Starry Night is one of the most recognized pieces of art in the world. It is absolutely everywhere, too. It can be seen on coffee, mugs, t-shirts, towels, magnets, etc. Honestly, it sometimes feels as if the painting’s fame has exceeded that of its creator. It is a magnificent piece of art. That Starry Night resonates with so many people is a testament to how its beauty is timeless and universal.


THE STORY OF STARRY NIGHT

Vincent van Gogh painted Starry Night in 1889 during his stay at the asylum of Saint-Paul-de-Mausole near Saint-Rémy-de-Provence. Van Gogh lived well in the hospital; he was allowed more freedoms than any of the other patients. If attended, he could leave the hospital grounds; he was allowed to paint, read, and withdraw into his own room. He was even given a studio. While he suffered from the occasional relapse into paranoia and fits - officially he had been diagnosed with epileptic fits - it seemed his mental health was recovering.
Unfortunately, he relapsed. He began to suffer hallucination and have thoughts of suicide as he plunged into depression. Accordingly, there was a tonal shift in his work. He returned to incorporating the darker colors from the beginning of his career and Starry Night is a wonderful example of that shift. Blue dominates the painting, blending hills into the sky. The little village lays at the base in the painting in browns, greys, and blues. Even though each building is clearly outlined in black, the yellow and white of the stars and the moon stand out against the sky, drawing the eyes to the sky. They are the big attention grabber of the painting. 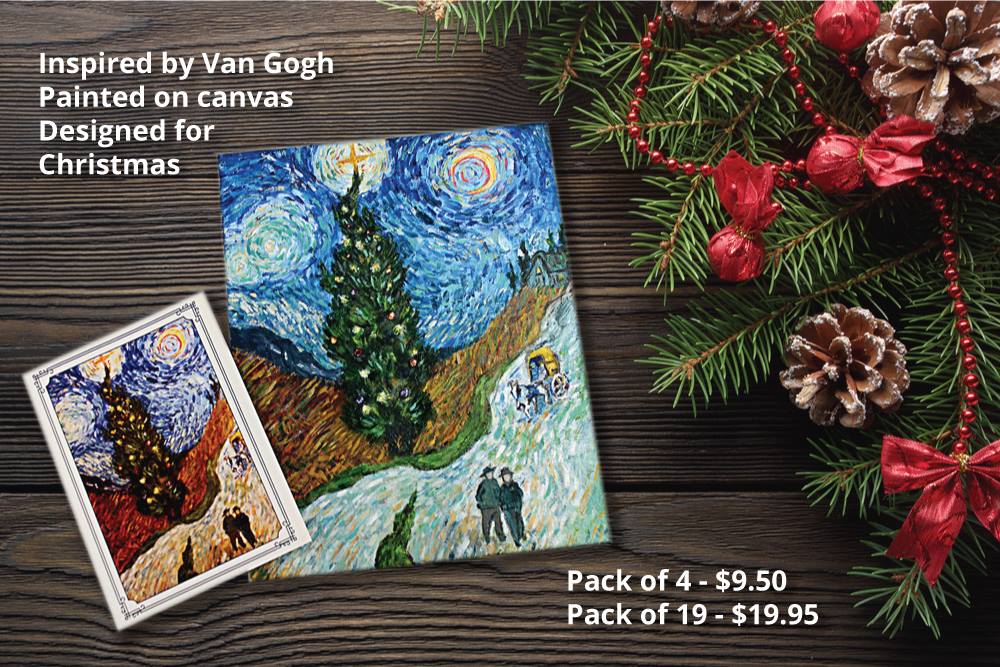 Notice the brush strokes. For the sky they swirl, each dab of color rolling with the clouds around the stars and moon. On the cypress tree they bend with the curve of the branches. The whole effect is ethereal and dreamlike. The hills easily roll down into the little village below. In contrast, the town is straight up and down, done with rigid lines that interrupt the flow of the brush strokes. Tiny little trees soften the inflexibility of the town. Bringing nature into the unnaturalness of buildings.
One of the biggest points of interest about this painting is that it came entirely from Van Gogh’s imagination. None of the scenery matches the area surrounding Saint-Paul or the view from his window. As a man who religiously paints what he sees, it’s a remarkable break from Van Gogh’s normal work.
The contrast in styles plays on the natural versus the unnatural, dreams versus reality. Nature could even be attributed to the divine in this work. In Genesis 37:9, Joseph states, “And he dreamed yet another dream, and told it his brethren, and said, Behold, I have dreamed a dream more; and behold the sun and the moon and the eleven stars made obeisance to me.” - predicting that one day his family would bow to him as an authority. Some people associate this quote to the painting. Perhaps it is a reference to Van Gogh’s family, who doubted the success of his career (with the notable exception of his brother). It could be that Van Gogh simply wanted to breathe in the higher power into his art, as he grew up in a religious household. Divide the painting into three parts. The sky is the divine. It is by far the most dreamlike, unreal part of the painting, beyond human comprehension and just out of reach. Go down one level to the cypress, the hills, and the other trees on the ground. They bend and swirl, still soft angles that match the soft swirls of the sky. The last part is the village. The straight lines and sharp angles divide it from the rest of the painting, seemingly separating it from the “heavens” of the sky. However, note the dots of trees rolled through the village, how the spire of the church stretches up to the sky. Van Gogh brings God to the village.

STARRY NIGHT OVER THE RHONE