The poppy flower is common to many Van Gogh Vase with Red Poppies countries but is often associated with the blooms covering expansive open fields in the South of France. This image is likely ingrained in the subconscious due to the popularity of the many Van Gogh poppy field paintings. Typically blooming in May and June, painting from what he saw in nature, Van Gogh poppies are were also late spring creations.

Between the years 1886 and 1890, Vincent van Gogh completed seven different paintings featuring poppy flowers. His earliest ones were done during his time in Paris mainly of cut flowers in vases such as Vase with Red Poppies, 1886 and Vase with Cornflowers and Poppies, 1887. Van Gogh did not have money to pay models, so still-life painting became more practical. In a letter from 1886, Van Gogh wrote to the artist Horace M. Livens about how he put more emphasis on the colors in his paintings and how in using vibrant contrasting colors he is able to render life through color:
“And now for what regards what I myself have been doing, I have lacked money for paying models else I had entirely given myself to figure painting. But I have made a series of colour studies in painting, simply flowers, red poppies, blue corn flowers and myosotys, white and rose roses, yellow chrysanthemums-seeking oppositions of blue with orange, red and green, yellow and violet seeking les tons rompus et neutres to harmonize brutal extremes. Trying to render intense colour and not a grey harmony. Now alter these gymnastics I lately did two heads which I dare say are better in light and colour than those I did before. So as we said at the time: in colour seeking life the true drawing is modelling with colour.” 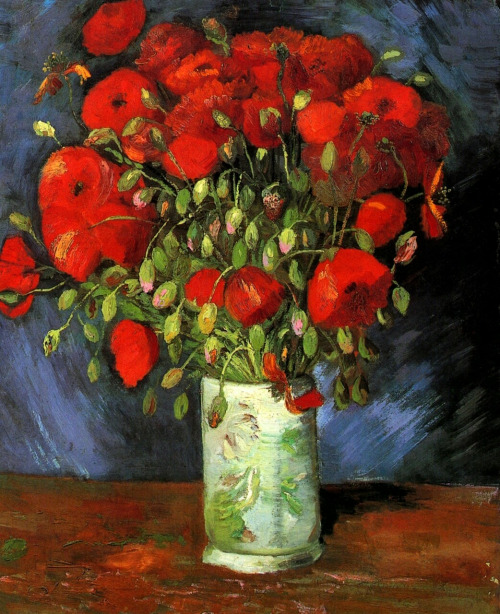 A few years later in a letter to his sister Wilhelmina from June of 1888, Van Gogh wrote about his plans for using contrasting Van Gogh Field with Poppies colors in his paintings of flowers. He used this technique in many of his poppy paintings with the brilliant red of the poppy blooms against the bright green of alfalfa fields as in Field with Poppies, 1890:
“And that furthermore in my own technique I have the same ideas about colour, even thought about them when I was still in Holland. Cornflowers and white chrysanthemums and a certain number of marigolds - see here a motif in blue and orange. Heliotrope and yellow roses - motif in lilac and yellow. Poppies or red geraniums in vigorously green leaves - motif in red and green. 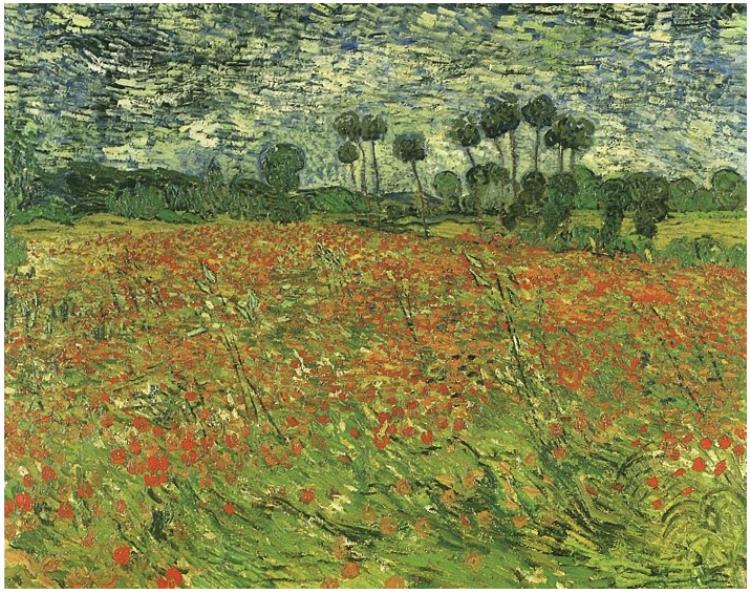 These are fundamentals, which one may subdivide further, and elaborate, but quite enough to show you without the help of a picture that there are colours which cause each other to shine brilliantly, which form a couple, which complete each other like man and woman.”
It was this use of complementary colors that Van Gogh became known for and which sets his paintings like Poppies and Butterflies, 1890 apart from other still-life works. View more of Van Gogh’s poppy paintings below: