Van Gogh’s life was full of new starts, changes of scenery, and ideas of things getting better. Often he would start something new convinced that once it worked out everything would be right. In early 1890, Vincent’s brother Theo had a son. Vincent was in great spirits saying “How glad I was when the news came.” He reluctantly accepted the honor of having the new child named Vincent, after himself, and became the child’s godfather.

When Vincent moved to Arles, he dreamed of a new beginning where artists lived together and painted happily. At the Saint Paul Asylum in Saint-Remy, he thought he would get better after a year and be able to continue his life with new found success and happiness, and then with the birth of his nephew, he saw a new life to be celebrated. Immediately after finding about the healthy birth he began on a painting for the baby – Blossoming Almond Tree. He wanted it to be hung above the bed in the parents’ and child’s room. Indeed, speaking of the child his brother’s wife wrote “He always looks with very great interest at Uncle Vincent’s paintings.” Van Gogh must have been very proud and filled with joy when thinking about his budding relationship with his nephew. 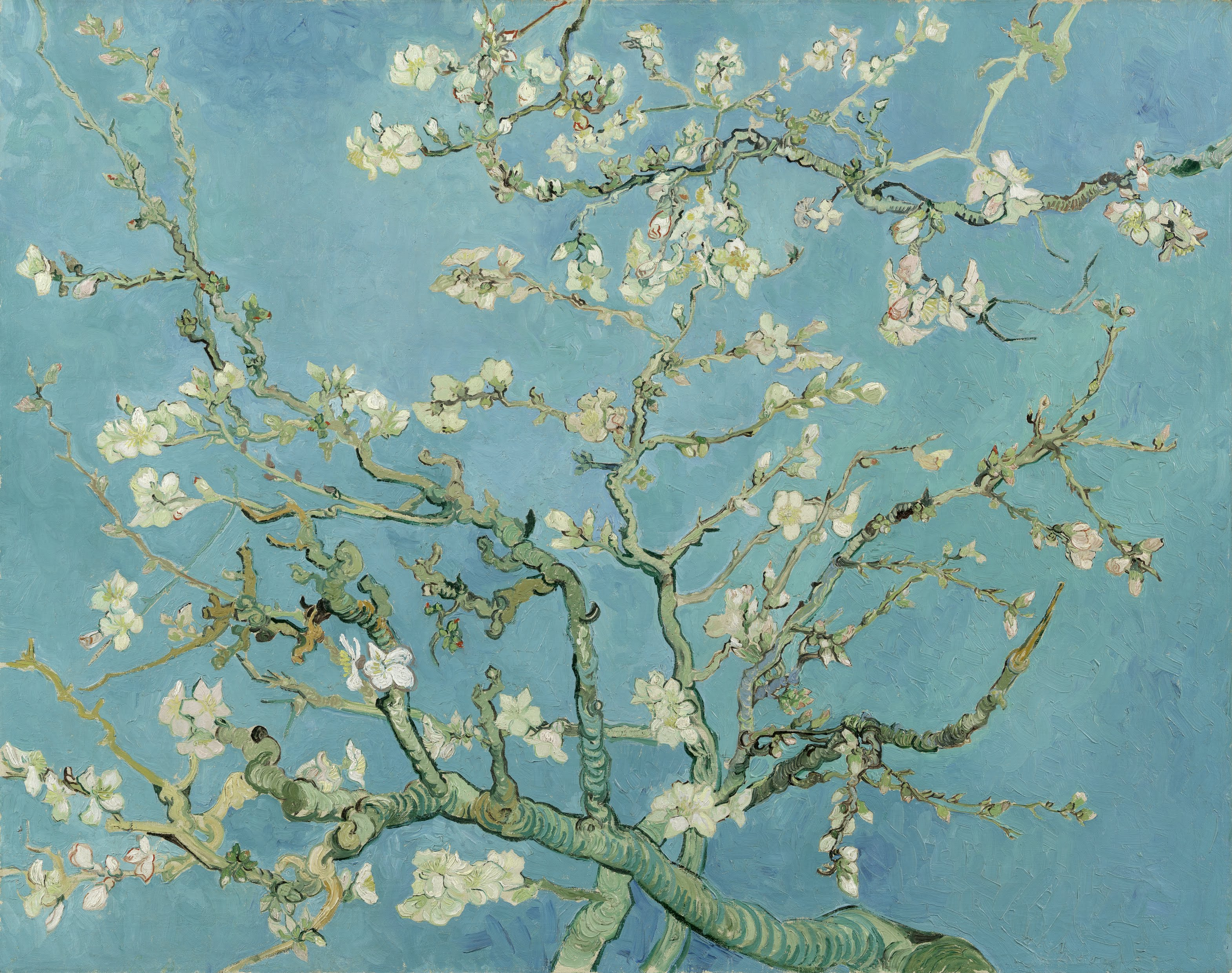 Almond branches are a subject that Van Gogh visited a few times before. In earlier studies, he painted cut branches set in a vase – as a still life. In this picture, Blossoming Almond Tree, for his nephew, he paints a very different composition. Instead of visiting the still life again, he shows white almond tree branches against a blue sky. It is not shown whether these branches are cut from the tree and sitting in a vase outside of the view of the viewer or if they are still on the tree, seen from below looking up towards the sky. It is an unusual composition for both art as a whole and for Van Gogh himself.

Like many of Van Gogh’s paintings, Blossoming Almond Tree has an influence from Japanese prints. Van Gogh collected and admired Japanese artists and used ideas such as bold color, dark outlines, and the beauty of nature in his work. Like pictures by the Japanese artist Hiroshige, Almond Tree shows the branches of a tree against the backdrop of a sky. This Japonisme creates a dynamic and modern composition while still being a recognizably Van Gogh painting.

Van Gogh’s Blossoming Almond Tree, also referred to as Almond Tree, represents much of what Vincent often thought about: rebirth. Trees blooming and flowering announces the beginning of spring and new life. As a gift to celebrate the birth of a child, this could not be more perfect. As soon as Van Gogh found out about the birth, he immediately thought to visit his brother in Paris. Knowing that he was still trying to overcome his mental health issues, he was aware that a trip to a big city could be taxing. He hoped his time in the asylum would enable him to start again, feeling well. He often wrote that he felt better after being in the hospital.

In May of 1890, he was able to leave Saint Paul’s in Saint-Remy and see his family; at this time he brought his painting of the almond tree. Unfortunately, his mental health continued to deteriorate, and he would die less than three months later in the summer of 1890.