In the winter of 1888, Van Gogh traveled to a town in the south of France called Arles. There he hoped to start a “Studio of the South” where painters could live and work together creating art in a region with more direct sunlight than Paris had and reminding Vincent of the landscape he admired in Japanese prints. The plan was for the artist Paul Gauguin, who was a friend of Vincent and his art dealer brother Theo, to join Vincent in Arles. It took a long time for Gauguin to be convinced to go south giving Vincent plenty of time to get settled in and paint his surroundings, including his bedroom.

When Van Gogh first arrived in Arles, he found accommodations in a hotel, but he quickly found that expensive. It was cheaper and far more ideal for him to rent a house where he and another artist could eat, sleep, and paint. Eventually, he found what would become known as “the Yellow House.” It was a modest two-story building with a front studio, back kitchen, and a few rooms upstairs. Being on a corner gave the house a slightly askew floor plan. The front wall and sidewalls were not at ninety-degree angles; instead the front wall went diagonal to align with the street below. 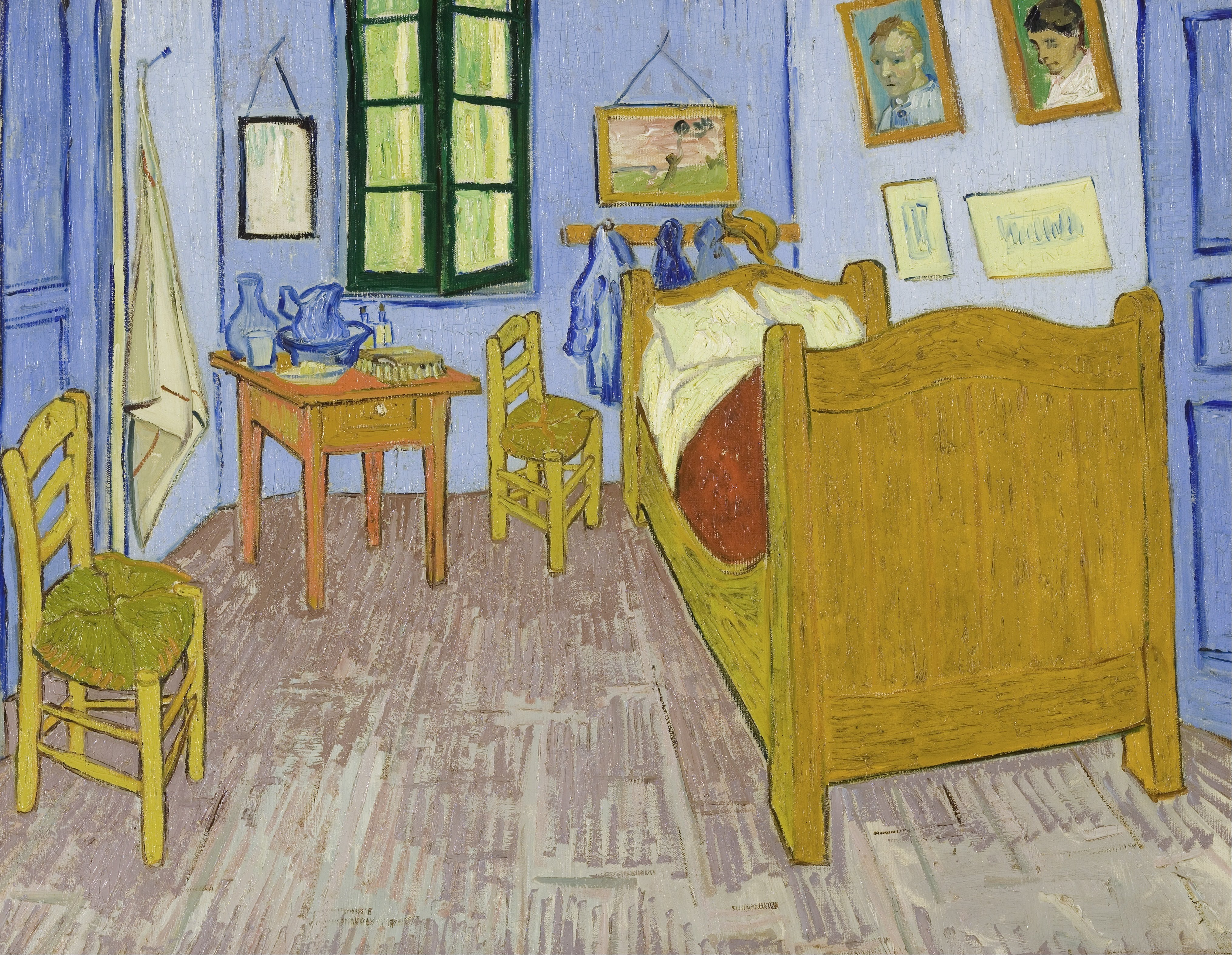 Like many of Van Gogh’s phases of his life, this new venture in Arles filled him with hope and anticipation. When Gauguin agreed to go to Arles, Van Gogh wrote to him saying he was envious of Gauguin’s upcoming train journey saying, “How I watched out to see ‘if it was like Japan yet’! Childish, isn’t it?” You can imagine the joy that Van Gogh was feeling while he waited for his friend to join him. To prepare for Gauguin’s arrival, Van Gogh and Gauguin exchanged letters and paintings. He also decorated the house with paintings of sunflowers and put the rooms together.

On October 16th 1888, Vincent wrote to his brother describing a painting of his bedroom. Because of the simplicity of the subject matter and items in the bedroom, Van Gogh felt that the color needed to “do the job” of the painting. Van Gogh’s Bedroom, or Bedroom in Arles, painting is of a room where one sleeps, and he wanted the painting to put the viewer’s mind and imagination at rest.

Upon entering the room, there is a bed to the right. Along the wall to the right is a chair, table with water on it, and a window overlooking the street. The wall on the left has another chair and the door to the second bedroom. Bedroom in Arles shows Van Gogh’s knowledge of color theory with oranges against blues, and red and greens. Inspired by the Japanese prints that Van Gogh studied, he omitted shadows from the picture. The lack of shadows, along with the distorted perspective, makes some of the objects appear to be falling or not steady. This is not entirely a result of working fast or a lack of skill. The odd angle of the far wall results in the furniture not aligning squarely.

Van Gogh must have liked the picture. In the letter to his brother he included a sketch of The Bedroom and then the very next day he wrote to Gauguin and included a sketch with that letter too! The painting he sent to his brother was damaged from a flood so he revisited the subject and painted it again the next year when he was in Saint-Remy. Then, still wanting to explore the subject, painted a third version for his mother. In all three paintings the composition is almost identical with minor changes to details and color.

Throughout Van Gogh’s career, he painted everything around him: landscapes, people in his town, or even the shoes he wore. In Van Gogh’s Bedroom in Arles he shows a room in his house. This house, his Studio of the South, was supposed be the height of his artistic vision. His painting of his bedroom was done with excitement and a hope for the future preparing to welcome his friend and fellow artist.