Van Gogh painted The Mulberry Tree in October of 1889 less than a year before he would die. Like most of his art, it was done during a period of highs and lows painted during a time of great self-awareness and yet surrounded by chaos.

Following a fight with his fellow artist Gauguin, during which the famous ear incident occurred, Van Gogh went to stay at the Saint Paul Asylum in Saint-Remy. He was there for about a year, from May 1889 to May 1890. After the incident in Arles, his mental state declined. He became paranoid thinking people were trying to poison him. While at Saint-Remy he wrote to his brother Theo about his state of mind, his new works, and the people around him. In the letters he acknowledges that he has been in a bad place mentally, but that he feels he is getting better. Seeing all the other patients with similar issues made him feel like he was not alone. 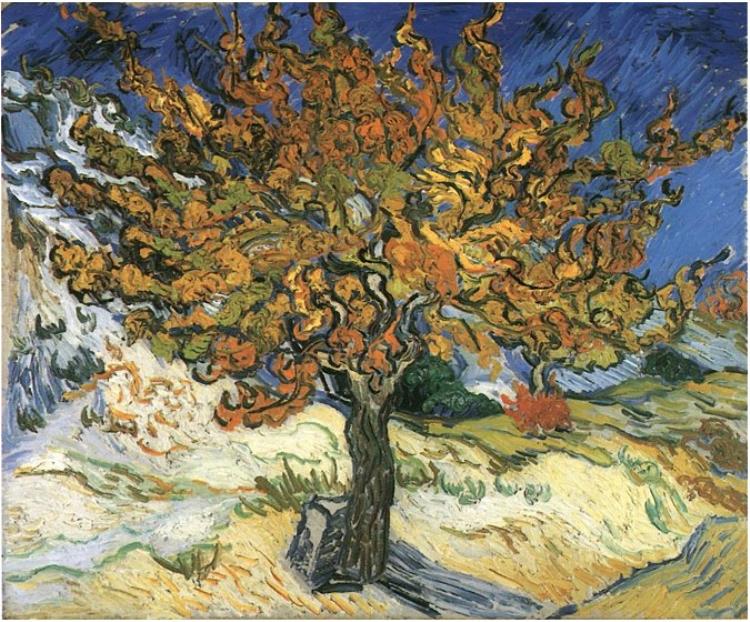 The constant in Van Gogh’s life was painting, and he continued it during his stay at the asylum. He painted all aspects of his life: the doctors, the hallways, the flowers in the gardens, the wheat fields, and the trees.

In Van Gogh’s Mulberry Tree we see a tree growing out of a rocky terrain. In early October 1889, he sent a few paintings, he called them studies, to his brother. In all the words describing this mulberry tree and the time he painted it he seems happy. In fact he writes “I’ll tell you that we’re having some superb autumn days, and that I’m taking advantage of them.” In December he sends a few paintings to his brother in Paris, but it is the Mulberry Tree that he says is his favorite.

The Mulberry Tree shows a tree from the garden of the asylum. It is centered on the canvas and is growing alone from a rocky hillside. The ground is made up of short quick brush strokes of white and pale browns. It creates a strong contrast to the dark green and brown of the tree trunk. To the right, you see more greens, indicating trees and growth in the distance. The leaves of the tree make up the majority of the painting, orange against the complementary color of the blue sky. It is that “superb autumn” that gave Vincent the bright orange leaves to paint. The ground and sky are made up of mostly straight diagonal brush strokes, while the tree leaves are made up of curling spirals of orange and black, sometimes done with the handle of his brush.

The Mulberry Tree by Van Gogh is a great example of his work and shows an interesting insight to his life. His bright colors show his interest in Impressionism, as this painting along with a few others was included in the Société des Artistes Indépendants show in 1890. His life was dedicated to art, and his letters are almost entirely devoted to the subject. This painting shows his knowledge of color theory, his awareness of the modern direction of painting, and his place in the world. No matter what was happening in his life, whether he was living in a house with a friend, or a patient in a mental hospital, all Van Gogh could do was carry on and paint.