IN HIS STEPS: ARLES, FRANCE 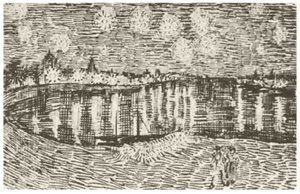 
The visitor's center in Arles provides a walking tour map of ten reproductions on easels depicting actual places throughout Arles including: Starry Night Over the Rhone and Café Terrace on the Place du Forum, Arles, at Night.


The Yellow House - The Studio of the South


Unfortunately this building was bombed during WWII. Today a newsstand and boulangerie stand in its place.
Address: Place Lamartine 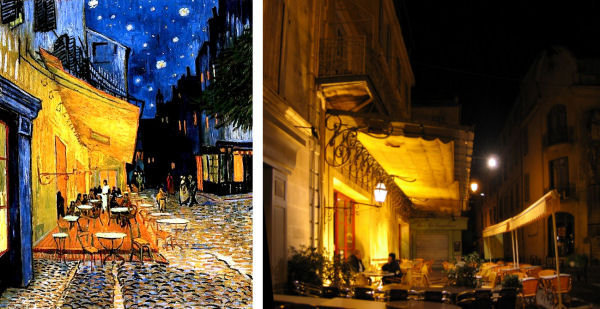 This is almost the same café terrace on the Place de Forum in Arles as when painted in Sep 1888. – Photo by Rudi Schols

This is the hospital where Van Gogh was taken after he cut off a portion of his ear. He also painted the interior courtyard of this former hospital.

This image shows the courtyard of the Hospital at Arles as it is today and as Vincent painted it in 1889. – Photo by Rudi Schols

This is a bridge that Vincent liked for it's Japanese look. He painted this bridge in The Langlois Bridge at Arles. Visitors can see this bridge in the South of Arles

The Langlois Bridge in Arles was painted on the right side of the river in May 1888 and the bridge survives to this day. – Photo by Rudi Schols

This photo shows the painting Vincent completed in Oct 1888 and the view today. (that’s Rudi on the steps of the bridge which is in Arles) – Photo by Rudi Schols